100 chocolate bars, a very old car and a lot of driving

At the end of August, we handed over £2,700 to Children First Derby, our charity of the year for 2016. We're super proud that we managed to raise this amount of money from one event and we asked Chief Shakeologist, Leigh, to tell us more about it for our first BRAND NEW blog!

"When we started working with local charity Children First Derby, we knew we would need to come up with lots of ideas for fundraising. We've been quite good at this in the past (my favourite has got to be the X Runner mud run) but we wanted to do something bigger. After much debate, the Shakeologists decided that the Monte Carlo or Bust (MCoB) Banger Rally would do nicely but with two of us needing to go, we had to convince the Shakin' it owners. We told them the team would continue to make the best Milkshakes ever in our absence and that seemed to do the trick!

Just in case you don't know what it is, the MCoB Rally involves a lot of driving - from Belgium to Monte Carlo via the Black Forest, Luxembourg, Switzerland and Italy. The catch is that you must enter with a car bought for £300 or less and attempt some Top Gear challenges along the way - easy!  So, once we got the go-ahead, we started raising money with our very own text number for donating and buckets on the counter. And, at the same time, we started planning our trip. Cowboy outfits were first in the suitcase (we decided on the team name of Shakin' it Cowboys), along with plenty of chocolate bars from the Shakin' it menu for 'energy'. (I counted 100 in total).

MCoB was brilliant but tougher than we expected. We had snow, sunshine, floods, a minor car accident and worst of all, we ran out of chocolate. After driving from Derby, we joined 80 other entrants in Namur, Belgium. It rained a lot there, and then it rained some more. We were given points for completing challenges, like dressing up in Roman togas at the Gotthard Pass in Switzerland, pretending to be mannequins in a shop and 'voting' outside the European Parliament.  We had a scare when a lorry scraped the side of our car (aka the Shakemobile) and took the wing mirror off. We also got to camp at Lake Como in Italy for one night which was AMAZING!

We had some Shakey encouragement from the Shakeologists back home. They 'whatsapped' pictures of their Shake creations, including a Black Forest Gateau Shake, the best Milkshake ever according to the team (which was great because we couldn't try it!)

We came a respectable13th in the competition and were presented with medals. After all that hard work, the Shakemobile did us proud  (in spite of the damage) until we started to head home and then it gradually fell apart. We limped along to Paris before heading home on public transport. As it turned out, that was good because we were exhausted and needed some sleep!

In the end we raised £2,700 for Children First Derby, which was a lot more than we thought we would so it was smiles all round (and if you donated or sponsored us, thank you!). Plus we really enjoyed the trip and recommend you give volunteering a go if your boss gives you the chance. The adventure certainly got me thinking about doing more volunteering and I am starting some mentoring work with Children First Derby. I have also signed up for a BSc (hons) in Adventure Sport and Coaching Science since being back in Derby."

Did someone say retro?

We love a retro inspired treat and it turns out we have some seriously retro flavours on our menu (we didn't realise how old some sweet treats actually are!). Take the Wham Bar, it makes a fruity zingy Shake (particularly good

Fancy fruit in your Shake?

You might wonder why we introduced our Fruit Fusion range when we are already well known for our 'Shakeylicious' Milkshake treats. Well, we have all been encouraged to think more about what we eat and drink and there is much

Every year, we think about introducing Hot Shakes. The Shakeologists spend time dreaming up delicious recipes then at the very last hurdle...we just cannot find a speedy and safe way to get the milk for our Hot Shakes hot enough! But

We wish our customers and friends a happy and shakeylicious new year. It is two years since we introduced a range of Hot Shakes (after a customer asked for a Hot Chocolate Hob Nob Shake). For the first time ever,

We're open every day of the week in the Derbion Centre, on Level 1 near M & S and Costa Coffee.* 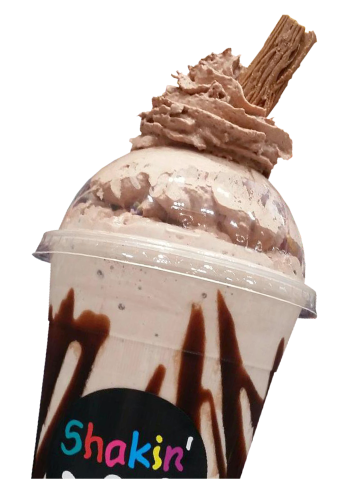